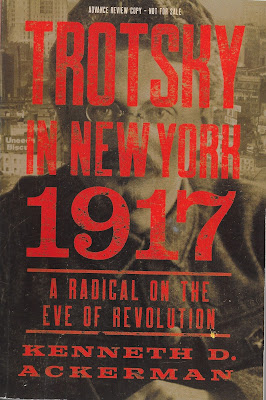 “Fun” and “Trotsky” are not a natural pairing, but that's what you get with Kenneth Ackerman's historical reconstruction of the wily Bolshevik's time in The Big Apple.


In a scrupulously researched book, Ackerman reconstructs Leon Trotsky's 10-week stay in New York City and makes some far-reaching claims about the importance of the layover that, at least, invite discussion.


Basically thrown out of Europe, Trotsky hit New York in 1917. The historian provides some background on the rebel's life prior to getting on that transatlantic crossing and knows a little about what happened on board as well.


As the book's subtitle – “A Radical on the Eve of Revolution” – suggests, Trotsky arrived anonymous, but would leave with his name on everybody's lips as turmoil in Russia created the opening he and Vladimir Lenin had been anticipating for years.


The noisy isle crowded with Yiddish-speaking, Russian Tsar-hating Jews, the elevated trains hammering out the urban machine soundtrack to industrial Manhattan, other flavors and phantoms are successfully summonsed in this engaging text.


The author traces Trotsky's steps: his rental in a middle-class section of the Bronx; his day job at a Russian-language left-wing rag (and debates therein); his interactions with socialists both American and foreign, his associates both old world and new.


Together, in New York and Trotsky, Ackerman ably helps himself to not one, but two great historical players so that, although we're dealing with footnoted, historical nonfiction, a lively and, yes, even fun, portrait of man and place in time emerges.


We might call it “Ragtime” for communists save for the fact Ackerman hews closer to an academic style than does E.L. Doctorow in his intentionally literary turn.


The portrait of Trotsky is that of a verbal and ideological bulldog, an insolent intellectual, a man convinced of his cause's correctness, intolerant of any divergence from his recipe for violent revolution.


The author does a bang-up job of resuscitating American socialist Morris Hillquit from the dustbin of history through the replay of his policy battle with Trotsky over how the American left would respond to the country's entry into World War I.


Hillquit prevailed... barely. Ackerman suggests that in his confrontations with the milder reformist and those of his ilk in New York, Trotsky mapped the future of American left-radicalism for decades to come.


That, and other claims the author makes regarding the impact of Trotsky's stay are plausible and provide fodder for debate and further scholarship.


The book sheds a novel light on the Russian Revolution, which looms quite so large given Trotsky's decisive role and Ackerman can't resist commenting on the too-big subject. Here he falls into a bit of rote anti-communism.


It's unavoidable that the horrors of Stalin, the gulags, show-trials, pogroms, etc., be raised, but there is no consideration of what good, if any, Trotsky's efforts generated so that Ackerman short-shrifts his own subject.


How history treats us! Hillquit, a decent human being and worldly character is forgotten, but the Trotsky produced here, who wrought nothing but heartache upon those he or his ideas touched, is the historical standout.


Without a counter-discussion, Trotsky comes across as a man of multiple talents, all of which were misapplied in the creation of a sanguinary communist dictatorship. But there were many who believed in the Soviet Union and still others who lament its passing. Their take on Trotsky is missing.


Which is to say, Ackerman should have stopped where his title does: in New York. The post-Gotham section is not inconsiderable and removes the reader from a curious epoch that is the book's strength.


Yes, following the trajectories of certain players, and Trotsky family members, in revolutionary Russia serves a purpose and provides the reader with satisfying – or mortifying – closure.


Still, the author would have lost nothing and gained a more cohesive “whole” by sticking with his attractive, almost stylized account and cutting Trotsky loose at the New York piers; letting him float off into a history left for books written and unwritten alike.
Posted by highwayscribery at 10:21 AM